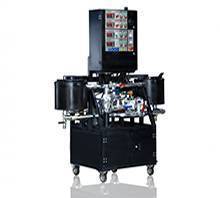 Modified bitumen started its development since the 60s of the last century. It appeared due to reduction of the service life of the upper layers of pavement as a result of increased axle loads and vehicle traffic. The traditional asphalt concrete was no longer meeting the requirements in terms of durability of pavement. Since the quality of pavement is primarily determined by the properties of bituminous binders, it was concluded that replacing a conventional bitumen with a polymer modified bitumen would be quite feasible.At the first stage researches were carried out, by the help of laboratory equipment, on the effectiveness of using different polymers, as well as the best technology to combine them with bitumen.

Over time, the obtained results were systematized, but scientific researches in the field of modified bitumen have not been stopped even until this day.

GlobeCore offers the UMB-L laboratory equipment to research laboratories, research institutes and enterprises, specializing in the production of asphalt concrete mixtures, construction and repair of roads, bridges and overpasses. This type of equipment is intended for developing recipes of modified bitumens and conducting all kinds of experiments.

The unit operates on the principle of in-line mixing with simultaneous dispersion of bitumen and polymer, which is achieved through a colloid mill.

The advantages of the GlobeCore UMB-L laboratory unit are:

– possibility of carrying out experiments directly at the place of production;

– obtaining prototype samples of modified bitumen with a capacity up to 12 liters per cycle;

– obtaining modified bitumen samples for laboratory analysis without a high consumption of the initial materials (bitumen, polymers, adhesive additives, plasticizers, and others);

– possibility of adding liquid components in the process of preparing modified bitumen;

– rapid adjustment of the technological process of preparing modified bitumen when having the required amount of modifying additives determined;

– possibility to supply the unit as separately, as in a bundle with plants designed to produce modified bitumen on a commercial scale;